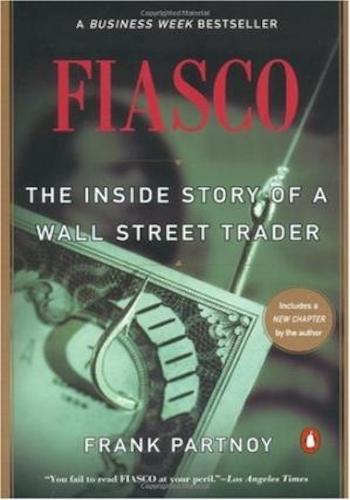 Fiasco: The Inside Story of a Wall Street Trader CHINESE

书籍英文名：Fiasco: The Inside Story of a Wall Street Trader CHINESE

书籍简介：FIASCO is the shocking story of one man’s education in the jungles of Wall Street. As a young derivatives salesman at Morgan Stanley, Frank Partnoy learned to buy and sell billions of dollars worth of securities that were so complex many traders themselves didn’t understand them. In his behind-the-scenes look at the trading floor and the offices of one of the world’s top investment firms, Partnoy recounts the macho attitudes and fiercely competitive ploys of his office mates. And he takes us to the annual drunken skeet-shooting competition, FIASCO, where he and his colleagues sharpen the killer instincts they are encouraged to use against their competitiors, their clients, and each other. FIASCO is the first book to take on the derivatves trading industry–the most highly charged and risky sector of the stock market. More importantly, it is a blistering indictment of the largely unregulated market in derivatives and serves as a warning to unwary investors about real fiascos, which have cost billions of dollars.

How to Deliver a Ted Talk: Secrets of the World’s Most Inspiring Presentations, Revised and Expanded New Edition, with a Foreword by Richard St. John and an Afterword by Simon Sinek

The Predators’ Ball: The Inside Story of Drexel Burnham and the Rise of the Junk Bond Raiders